Some years ago, a group of aging men planning their fiftieth college reunion decided to do something more than drink beer and share old stories. They had heard President John F. Kennedy deliver his last major public address less than a month before a shot fired in Dallas suddenly ended his life. He had delivered a direct, personal call to civic engagement, linked to an appeal for the liberal arts and their role in questioning and humanizing the use of power. The president’s words, and the events following that speech, changed their lives.

In discussions surrounding their 50th Reunion, The Amherst Class of 1964 considered the changes that had occurred in the previous 50 years.  What had been the impact of their generation?  They chose the theme, “The World We Inherited; the World We Will Bequeath” to stimulate both discussion and action.

Growing out of the reunion there was a strong sense that despite the many significant advances that had occurred in those 50 years, serious issues had developed, particularly within the areas of politics, environment, and education.  President Kennedy’s words heard by the Class of ’64 became a call to action.

Just 27 days before his death, in what is now viewed as his most “majestic” speech, President Kennedy spoke at Amherst College at the groundbreaking for the Robert Frost Library. He challenged students to a life of public service, extolled the importance of the arts and reflected on the work of Robert Frost and the relationship between poetry and power. Kennedy spoke of privilege, of inherited wealth and inherited poverty. “Unless the graduates of this college and other colleges like it who are given a running start in life – unless they are willing to put back into our society, those talents, the broad sympathy, the understanding, the compassion – unless they are willing to put those qualities back into the service of the Great Republic, then obviously the presuppositions upon which our democracy are based are bound to be fallible.” 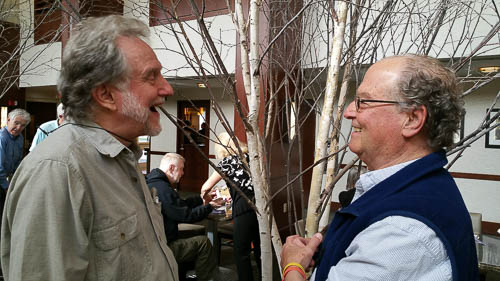 Gene Palumbo and Steve Downs, both appear in the film.

Charles (Smokey) Stove and Steve Smith, members of the Board of Directors of Reunion '64

Members of  the Amherst College Class of 1964 are shown in one of several discussions concerning the issues with our political system.  Other major topics considered were how to address environmental issues, fix our educational system, and repair our healthcare system.

Identifiable in the picture: 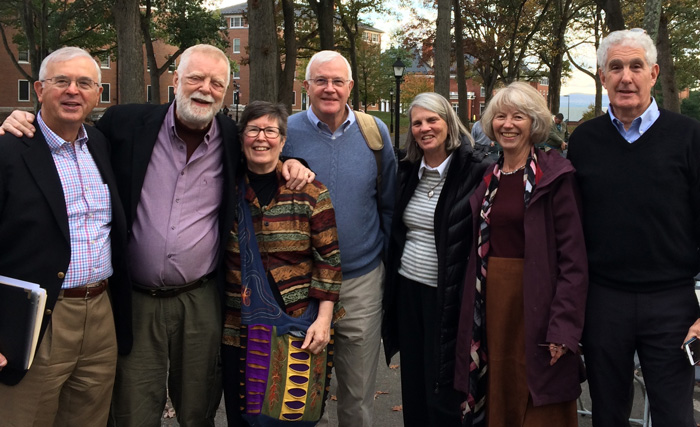 Reunion ’64, Inc. Committees and Board of Directors and Management

Contact us via email to jfkthelastspeech@gmail.com  We appreciate you noting errors or broken links and suggestions of additional topics for this website.