The Speech – The Politician’s Poetry

President Kennedy came to Amherst College for the Ground-breaking of the Robert Frost Library.

He had declared in his inaugural address that “The Torch Has Been Passed” to a new and optimistic generation.  His speech inspired the Class of 1964 as it did for so many other young men and women who heard or read it.  The documentary, book and website JFK: The Last Speech describes that profound experience, how those called to service by Kennedy’s words have carried that torch and anticipates the need to pass on to future generations the wisdom in Kennedy’s words.

President Kennedy delivered his last major speech at Amherst College on October 26, 1963.  He had come to honor Robert Frost at the Groundbreaking of the library to be named for the poet. Selected quotes and a link to the full text of the speech follow.

“Robert Frost was one of the granite figures of our time in America. He was supremely two things: an artist and an American. A nation reveals itself not only by the men it produces but also by the men it honors, the men it remembers.” 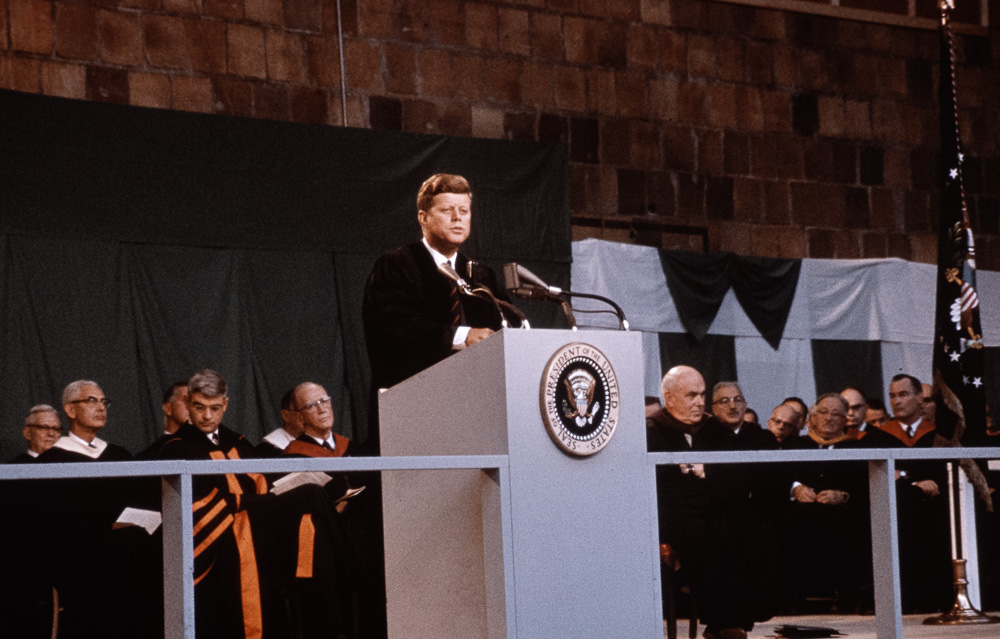 A Selection of Quotes from President Kennedy’s Convocation Address

Words spoken more than 50 years ago underscore the values that distinguish the American character. Prominent among Kennedy’s remarks were his views on civic culture, the relationship of poetry to power, and speaking the truth to power – discerning and doing what is right.

• I hope your commitment to the Great Republic’s interest in the years to come will be worthy of your long inheritance.

• Privilege is here. And with privilege goes responsibility.

• When power corrupts, poetry cleanses. For art establishes the basic human truths, which must serve as the touchstone of our judgment.

• I look forward to an America, which commands respect throughout the world not only for its strength, but for its civilization as well.

• I look forward to a world, which will be safe not only for democracy and diversity, but also for personal distinction.

• If sometimes our great artists have been the most critical of our society, it is because their sensitivity and their concern for justice which must motivate any true artist, makes him aware that our nation falls short of its highest potential.

• I see little of more importance to the future of our country and our civilization than full recognition of the place of the artist.

• In serving his vision of the truth, the artist best serves his nation.

See the President’s Hand-written Edits to the Speech Draft

Listen to the Audio Recording of the Speech

He could have concluded these remarks with a brief eulogy for Frost. But the president had not come to bury the poet. Instead, he came to the poet’s academic home to praise Frost as no one else could, by exploring in depth what Kennedy had come to believe were the ideal roles for poetry and power in American life, thought and democracy. 1

President Kennedy was awarded an honorary degree at the convocation. The Citation read:

John Fitzgerald Kennedy – A citation for the president of the United States reads more like a prayer to the heavens, for all hopes for the sanity of national and international understanding depend upon you. But while pledging our support, we can applaud your skill, admire your courage, and be grateful for your leadership. By virtue of the authority vested in me by the Board of Trustees of Amherst College, I confer upon you the degree of Doctor of Laws.  -Amherst College President Calvin Plimpton 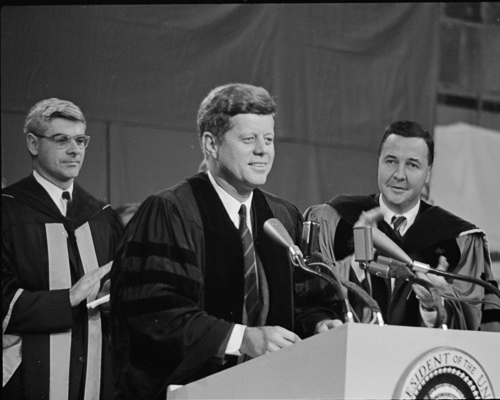 Reflections on the significance of President Kennedy’s speech:

The speech was electrifying to me ..[it] went right to my core. It was the idea of public service. And I realized that I was in a very unusual and special position, and I should try to serve. – Steve Downs, Amherst ’64

One of the things that was so striking about what he said at Amherst on that day is how it resonates with the problems that our country is facing today. – Joseph Stiglitz, Amherst ’64

Kennedy’s use of language, his appeal to fundamental democratic ideals, his emphasis on the responsibility that comes with freedom, and his opposition to hate were, for me, a kind of poetry that countered hatred’s destruction of language and thought. – Biddy Martin, Amherst College President

National purpose included the cumulative contributions of artists, writers, and poets… The idea [of the liberal arts] was freshened and vastly reinforced in the speech of this sitting president at the height of his powers. – Rip Sparks, Amherst ’64

The people of this countryside may forget in ordinary human course what anyone says on this occasion, but they will remember, for many, many years that a young and gallant President of the United States, with the weight of history heavy upon his shoulders, somehow found time to come to our small corner of the world to talk of books and men and learning. – Archibald MacLeish, Honorary Doctor of Laws, Amherst ’64

I have come to believe that the key to [the Frost-Kennedy] relationship was a deep, broad exposure to, and respect for, the liberal arts. They could both speak lucidly about history and power, art, and poetry. They both understood responsibility in human relationships. – Mark Sandler, Amherst ’64

Kennedy’s speech captured me. It wasn’t just the elegance of his words or the eloquence of his delivery… His words passed through my mind, reached my flesh. I felt disquietude, a deep, visceral connection. His words lit a fuse. Though I did not recognize it at the time, the arc of my life’s journey had just been set. – Ted Nelson, Amherst ’64

Both [Frost and Kennedy] were restless thinkers, rooted deeply and stubbornly in this New England soil. Both were lifelong students of the experience of ordinary men; they were explorers of the space between lofty vision and humble experience, between big dreams and hard realities. Neither aimed to proselytize or preach. Both strove simply to connect with our most basic humanity, our wants, our needs, pains and promises. In this shared effort, the poet and politician found common cause and mutual admiration for the other’s art. – Congressman Joseph Kennedy III, Great-Nephew of President Kennedy2

When Kennedy spoke, he spoke to me … My generation has the ability to help the next generation embody what I think Kennedy was trying to embody for us. And if we don’t do that, I think we will have missed an opportunity. – Peter Rubinstein, Amherst ’64

Frost and Kennedy saw the political arena as requiring an artist’s touch, including the artist’s strength of character. Those most fit for statecraft had a breadth of education that encompassed all the liberal arts and sciences. They could be trusted to see clearly, to balance extremes…

Kennedy had a remarkable ability to encourage young people … and I think his death set for us an agenda to become involved. – Robert Benedetti, Amherst ’64

On that October day, I hoped that President Kennedy would deliver some version of Dr. King’s “Dream” speech, that he would vindicate us who at the time may have been considered by some as “rabble rousers.” Kennedy spoke to our questions about a common future. He challenged us to recognize our responsibility to the “public interest” by giving the best of all of us “to make it possible for Americans of all races and creeds to live in harmony, to make it possible for a world to exist in diversity and freedom.” He gave a “Dream” speech, after all. – James Giles, Amherst ’64

The President’s Words Still Speak to Us

At first reading, Kennedy’s Amherst Convocation address is two in one. He begins by calling attention to graduates of the College who have done distinguished public service, calls current students to follow their lead, and reminds them that their privileged position as highly educated Americans implies the responsibility of civic engagement.

Only then does Kennedy turn to a reflection on Robert Frost..

While Kennedy does not link the two parts of his address together rigorously, the juxtaposition and conclusion implies an interaction.  If the public interest is to be served, those who pursue public service must be open to currents of thought beyond those required to accumulate power and wealth.  They must be as fluent in the arts, humanities, and pure science as in business and technology, as articulate regarding ends as they are means… Read the full essay by Robert Benedetti 3