On Tuesday morning, October 16, 1962, shortly after 9:00, President Kennedy called and asked me to come to the White House.  He said only that we were facing great trouble.  Shortly afterward, in his office, he told me that a U-2 had just finished a photographic mission and that the Intelligence Community has become convinced that Russia was placing missiles and atomic weapons in Cuba.1 –Robert Kennedy

On October 16,  Kennedy learned that his most serious problem was not Berlin, not the quest for racial justice, not the November election.  It was nuclear weapons in Cuba. 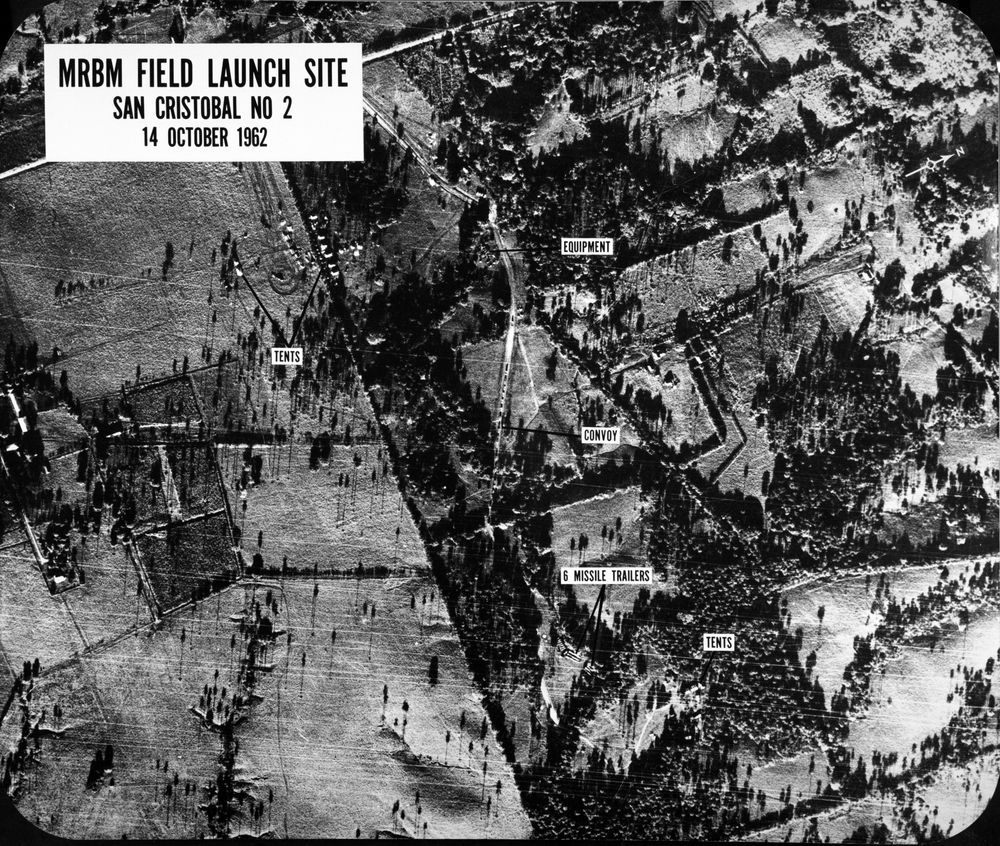 As Seen By the US

The Ex Comm Favored a Blockade or Military Strike

The Joint Chiefs Wanted an Invasion

President Kennedy’s address to the nation on October 22, 1962

This Government, as promised, has maintained the closest surveillance of the Soviet Military buildup on the island of Cuba. Within the past week, unmistakable evidence has established the fact that a series of offensive missile sites is now in preparation on that imprisoned island. The purpose of these bases can be none other than to provide a nuclear strike capability against the Western Hemisphere…

The characteristics of these new missile sites indicate two distinct types of installations. Several of them include medium range ballistic missiles capable of carrying a nuclear warhead for a distance of more than 1,000 nautical miles. Each of these missiles, in short, is capable of striking Washington, D.C., the Panama Canal, Cape Canaveral, Mexico City, or any other city in the southeastern part of the United States, in Central America, or in the Caribbean area.

Additional sites not yet completed appear to be designed for intermediate range ballistic missiles–capable of traveling more than twice as far–and thus capable of striking most of the major cities in the Western Hemisphere, ranging as far north as Hudson Bay, Canada, and as far south as Lima, Peru. In addition, jet bombers, capable of carrying nuclear weapons, are now being uncrated and assembled in Cuba, while the necessary air bases are being prepared…

Acting, therefore, in the defense of our own security and of the entire Western Hemisphere, and under the authority entrusted to me by the Constitution as endorsed by the resolution of the Congress, I have directed that the following initial steps be taken immediately:

First: To halt this offensive buildup, a strict quarantine on all offensive military equipment under shipment to Cuba is being initiated. All ships of any kind bound for Cuba from whatever nation or port will, if found to contain cargoes of offensive weapons, be turned back. This quarantine will be extended, if needed, to other types of cargo and carriers. We are not at this time, however, denying the necessities of life as the Soviets attempted to do in their Berlin blockade of 1948.

Second: I have directed the continued and increased close surveillance of Cuba and its military buildup…

As Seen By the USSR

As Seen By the US 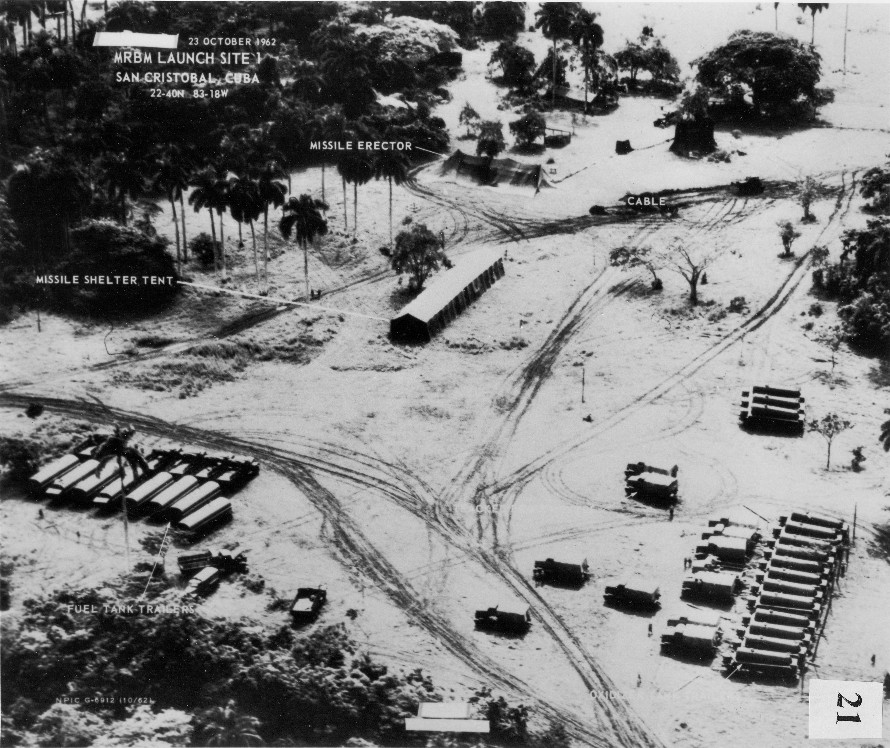 The Soviet Union sought to address the imbalance in nuclear weaponry by installing such weapons in Cuba.  According to Richard Reeves writing in President Kennedy, the United States had approximately five thousand deliverable nuclear weapons.  U.S. intelligence estimated that the Soviets had three hundred deliverable weapons.  The U.S. estimate of the number of Soviet intercontinental missiles targeted at the United States was now seventy-five.  Those missiles had relatively primitive guidance systems, and analysts on both sides doubted they cold even come close to their presumed targets.  The Soviets also had ninety-seven short-range missiles on submarines that had to surface before they could launch, and 155 heavy bombers.

The U.S. had 156 ICBMs, 144 Polaris missiles that could be fired from submarines without surfacing, and 1,300 bombers all nuclear-armed and a third of them in the air at all times.

In addition, they had deployed an air defense system of SAMs capable of striking aircraft at 70,000 feet.  They also had 40 MiG-21 and 6 MiG-15 fighter aircraft, as we// as helicopters, gunboats, tanks and artillery. (Sherwin, 200)