“Like a piece of ice on a hot stove the poem must ride on its own melting. A poem may be worked over once it is in being, but may not be worried into being. Its most precious quality will remain its having run itself and carried away the poet with it. Read it a hundred times: it will forever keep its freshness as a petal keeps its fragrance.”

Frost’s friend, G. Armour Craig, described his teaching approach: He was not a conventional member of the Amherst Faculty or of any other.  He did at first teach some more or less conventional courses in drama and poetry.  Later, he taught American literature with George Whicher. He taught philosophy with Otto Manthey-Zorn [a professor of German literature and philosophy].  He taught many courses in writing.  And late in the ‘twenties he gave a general reading course the books for which belonged to many different departments.  If one of his favorite author was Emerson, another was Darwin — he never lost his admiration for The Voyage of The Beagle.

His favorite course, perhaps, was one that he began to give in 1923.  It was described thus in the Catalogue:

Judgment in history, religion, and the arts.  A study by the case method, of how such judgments are arrived at and evaluated.

With Robert Frost, of course, the question did not concern techniques of judgment: it concerned, rather, the elevation of ourselves, by wisdom and knowledge, to a level on which we can make such judgments responsibly and freely … for him, the fact was the sweetest dream that reason knows, and all his efforts as a talker and thinker were to push aside the encrustations that gather on the monuments of history, religion, and the arts.  He wanted to clarify each one; he wanted prowess and performance, wherever they might be found, to shine forth of themselves.

This study of human, indeed humanist, judgments was perhaps the only course he really gave.  It was certainly the course of his conversation, and it was in his conversation that he was chiefly, if not exclusively, a teacher. 1

Frost spoke of the artistry of poetry in a 1931 talk at Amherst College:

“Education by poetry is education by metaphor… We like to talk in parables and in hints and in indirections… Poetry provides the one permissible way of saying one thing and meaning another.

As his talked moved towards the end, his philosophy, faith and spirituality became the topic, and he concluded with his “Four Beliefs:”

The person who gets close enough to poetry, he is going to know more about the word belief than anybody else knows, even in religion nowadays. There are two or three places where we know belief outside of religion. One of them is at the age of fifteen to twenty, in our self-belief. A young man knows more about himself than he is able to prove to anyone. He has no knowledge that anybody else will accept as knowledge. In his foreknowledge he has something that is going to believe itself into fulfilment, into acceptance.

There is another belief like that, the belief in someone else, a relationship of two that is going to be believed into fulfilment. That is what we are talking about in our novels, the belief of love. And the disillusionment that the novels are full of is simply the disillusionment from disappointment in that belief. That belief can fail, of course.

Then there is a literary belief. Every time a poem is written, every time a short story is written, it is written not by cunning, but by belief. The beauty, the something, the little charm of the thing to be, is more felt than known… [It is] in every work of art, not of cunning and craft, mind you, but of real art; that believing the thing into existence, saying as you go more than you even hoped you were going to be able to say, and coming with surprise to an end that you foreknew only with some sort of emotion.

Now I think—I happen to think—that those three beliefs that I speak of, the self-belief, the love-belief, and the art-belief, are all closely related to the God-belief, that the belief in God is a relationship you enter into with Him to bring about the future. 2

Read the full text of Education by Poetry 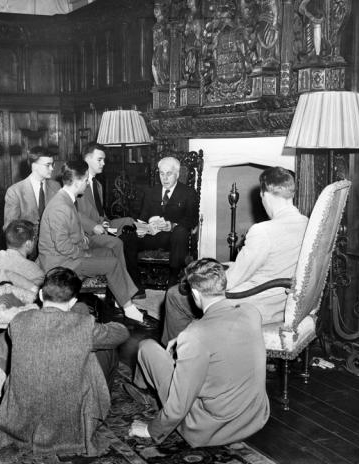 The preface to Frost’s 1939 compilation, The Complete Poems of Robert Frost, tells of the creation of a poem:

THE FIGURE A POEM MAKES. It begins in delight and ends in wisdom. The figure is the same as for love. No one can really hold that the ecstasy should be static and stand still in one place. It begins in delight, it inclines to the impulse, it assumes direction with the first line laid down, it runs a course of lucky events, and ends in a clarification of life-not necessarily a great clarification, such as sects and cults are founded on, but in a momentary stay against confusion. It has denouement. It has an outcome that though unforeseen was predestined from the first image of the original mood-and indeed from the very mood. It is but a trick poem and no poem at all if the best of it was thought of first and saved for the last. It finds its own name as it goes and discovers the best waiting for it in some final phrase at once wise and sad-the happy-sad blend of the drinking song.

No tears in the writer, no tears in the reader. No surprise for the writer, no surprise for the reader. For me the initial delight is in the surprise of remembering something I didn’t know I knew. I am in a place, in a situation, as if I had materialized from cloud or risen out of the ground. There is a glad recognition of the long lost and the rest follows. Step by step the wonder of unexpected supply keeps growing. The impressions most useful to my purpose seem always those I was unaware of and so made no note of at the time when taken, and the conclusion is come to that like giants we are always hurling experience ahead of us to pave the future with against the day when we may want to strike a line of purpose across it for somewhere. The line will have the more charm for not being mechanically straight. We enjoy the straight crookedness of a good walking stick. Modern instruments of precision are being used to make things crooked as if by eye and hand in the old days. 3

“My Poetry and my teaching were one …”

Frost’s teaching methods were in line with those of other innovative educator sin the early 1900’s.  In his 2003 book,  Martin Bickman writes that “innovative educators focused on the relevance to their work of poetry and the arts while poets and artists became especially involved in education. This was not a peripheral interest on the part of either, but the sharing of a deep root metaphor: the making of poetry and art became a paradigm for learning and teaching … More specifically, artists and educators shared assumptions about the use of metaphor to bridge the abstract and the concrete, the making of forms as crucial to the act of knowing, and the need to deconstruct and reconstruct these forms…
Frost, a teacher himself for a much of his career, wrote: ‘It slowly dawned on me that my poetry and my teaching were one, and if you knew my poetry at all well, you’d see that: that every little while there was the gleam of the teacher, that the two things were working.'” Read more from Bickman’s book, Chapter 7, “Education by Poetry: Pedagogy and the Arts in Early Modernism.” 4

“Professor Dwight Salmon, the faculty advisor for our fraternity, invited his friend Robert Frost to the house. Frost came to talk with us shortly before he died. We all sat on the rug to listen to him. He wanted to answer our questions, not just talk about what was important to him. He was clear and concise in his responses; he projected strength and wisdom. It was an elevating experience.”    — Steve Drotter, Amherst 1964

“I recall Robert Frost’s answer to a question about why he was not more politically active: ‘I do good by doing well.'”–Tom Jacobs, Amherst 1964

“Then there’s the poet. I saw him twice when he was in his late 80s, reflective, grizzled but clear-headed. The first time was during a small forum discussion with Archibald MacLeish. MacLeish was a much younger poet of great renown, widely traveled and urbane. He would become Amherst’s poet after Frost died. They had a conversation more or less about their poetry, their lives, and what they had learned. I remember clearly my primary impression of that talk. MacLeish had traveled broadly and seemed to know everyone. Frost was New England. But whatever the topic, it seemed as if Frost plumbed a far greater depth. You just wanted to sit with Frost and have him share his perspective on the things that mattered in life. At nineteen, I thought he could save me a lot of time and effort if he shared what he had come to know.”  — Mark Sandler, Amherst 1964

“I remember when Robert Frost gave a talk in Johnson Chapel, probably during second semester of our freshman year. It’s an experience I’ll never forget. I remember one of his first lines: ‘the purpose of a liberal arts education is to teach you books. Once you know books, you can learn anything you wish.'” –Doug Reilly, Amherst 1964

In the Winter Woods Alone 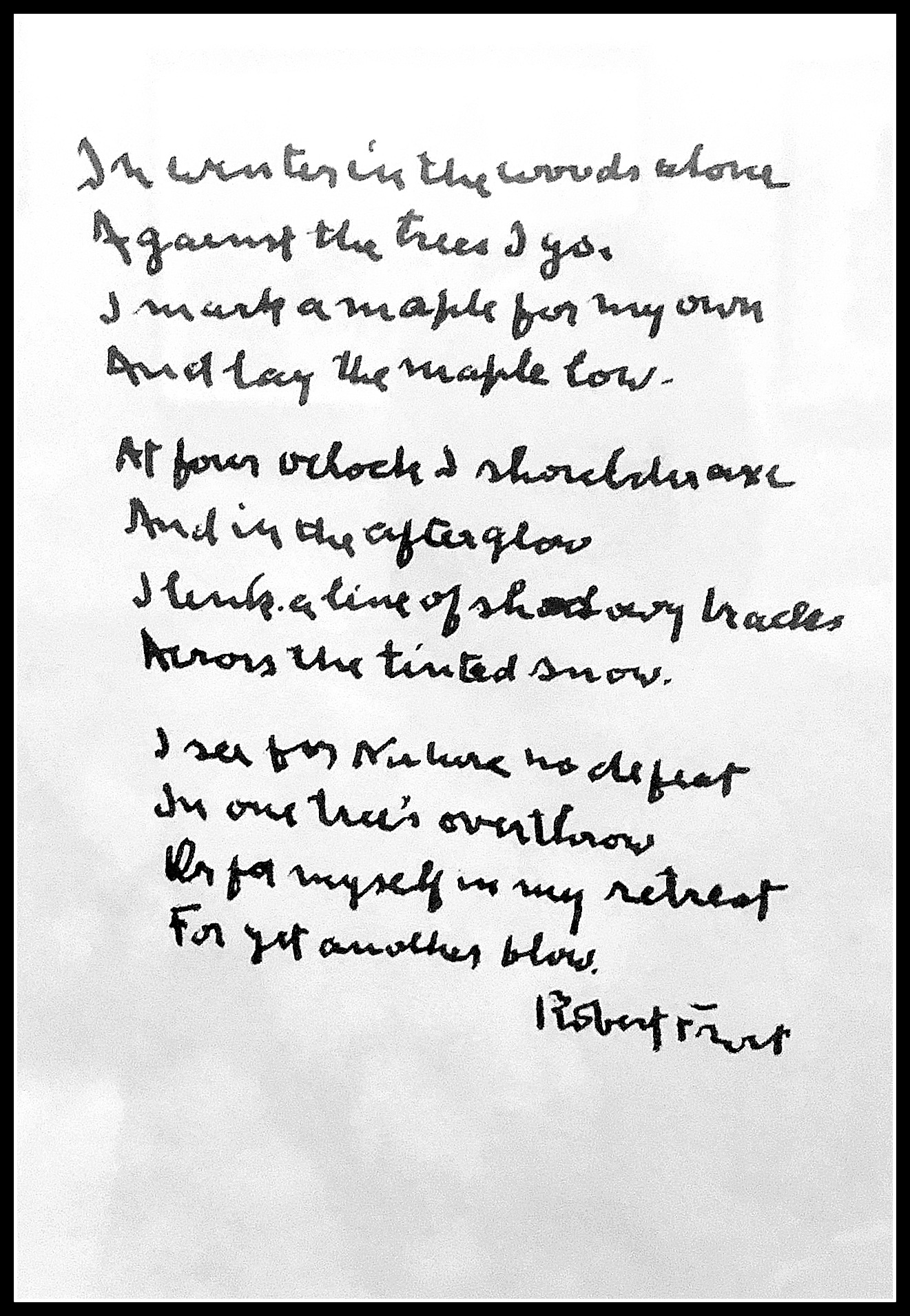 In winter in the woods alone

Against the trees I go.

I mark a maple for my own

And lay the maple low.

At four o’clock I shoulder axe

And in the afterglow

I link a line of shadowy tracks

Across the tinted snow.

I see for Nature no defeat

In one tree’s overthrow

Or for myself in my retreat

For yet another blow.


Dave Pearle, A’64 was among a group of students listening to Robert Frost as he was being filmed.  Pictured at left is Dave’s copy of the hand-written poem, In the Winter Woods that Frost gave to each student.