He had promises to keep …

Robert Frost died in January, 1963, only months after his historic visit to the Soviet Union and meeting with Premier Nikita Khrushchev.  The White House announced:

The death of Robert Frost leaves a vacancy in the American spirit. He was the great American poet of our time.  His art and his life summed up the essential qualities of theNew England he loved so much: the fresh delight in nature, the plainness of speech, the canny wisdom, and the deep, underlying insight into the human soul.  His death impoverishes us all, but he has bequeathed his Nation a body of imperishable verse from which Americans will forever gain joy and understanding.  He had promises to keep, and miles to go, and now he sleeps. 1

On October 26, 1963, the Amherst community gathered to welcome President Kennedy who had come to celebrate the Groundbreaking of the Robert Frost Library.

Frost had died that January. Both the President and the poet, Archibald MacLeish were to receive honorary doctorates. The following tribute to Robert Frost is excerpted from MacLeish’s Convocation Address:

There is an old Gaelic tale of the West Highlands called “The Brown Bear of The Green Glen” which has a whiskey bottle in it so definitively full that not a drop can be added, and so fabulously copious that nothing is lost, no matter how you drink it. Frost’s fame is like that bottle: it can’t be added to because it is full already, and it won’t draw down however it is drunk…

No one in my time upon this planet was so pursued by fame as Frost – so “publicized” in the specific sense and meaning of that word. But even now, months after his death, the “public image,” as the industry would call it, has already begun to change like the elms in autumn, leaving enormous branches black and clean against the sky.

Robert Frost was a member of the Amherst College faculty for more than 40 years, he taught at the liberal arts college on and off beginning in 1917 and until his death in 1963.  Amherst remembered Frost in many ways, most visibly in the Frost Library and in the gift by the Amherst Class of 1957 of a large sculpture.  The sculpture

“Recognize[s] the importance of teaching at Amherst. Robert Frost taught generations of Amherst students over the course of four decades, and we concluded that a sculpture of Frost, looking across the Main Quadrangle toward the Frost Library, would be a fitting way to symbolize the significance of teaching at the college and the gratitude of alumni to their professors…

Generations of Amherst alumni remember taking classes with Robert Frost. He first lectured at the college in 1916, and served on the faculty from 1917 to 1920, 1923 to 1925, 1926 to 1938, and 1949 to 1963. He received his first-ever honorary degree—an M.A.—from Amherst in 1918; the college awarded him an honorary Litt.D. degree in 1948. During his tenure at Amherst, Frost taught courses in topics including composition, American literature and English literature. He also held public readings, conducted informal classes and readings with students, and worked individually with students and faculty.”  3 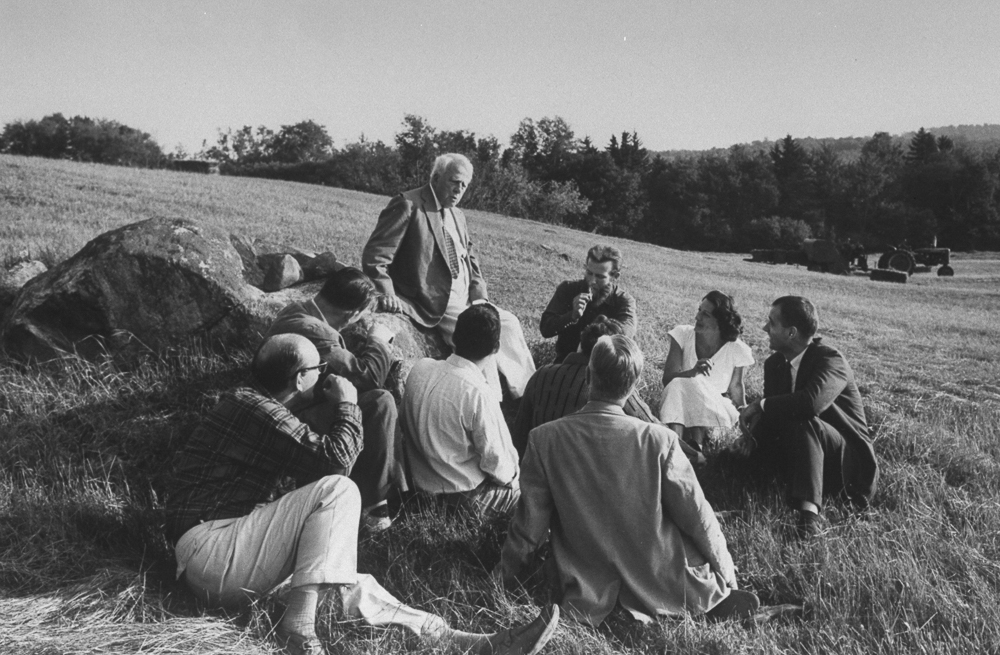 Frost with Bread Loaf Students: Courtesy of Dartmouth College Library, used with the permission of the Estate of Robert Frost.