“A poem…begins as a lump in the throat, a sense of wrong, a homesickness, a lovesickness. It is a reaching-out toward expression; an effort to find fulfillment. A complete poem is one where an emotion finds the thought and the thought finds the words.”

Robert Frost’s poetry is on our tongues – we remember words that touch our hearts. It speaks for the earth as well as the depths of human feeling – both elation as in “sheer morning gladness at the brim,” or the sadness of “nothing to look backward to with pride, and nothing to look forward to with hope…”

In this brief consideration of Frost — a poet, scholar, teacher, neighbor and citizen, we provide excerpts from his writings and his lectures, insights into his values and interests from those who knew him or studied his work, and reflections on his character and influence.

Who was Robert Frost? 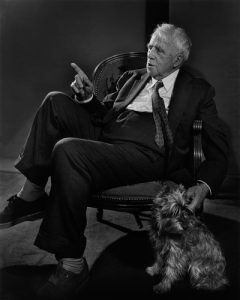 ”He cuts across the class system in America and he speaks to both the ordinary man and woman and he speaks to the literary critic, the philosopher, the intellectual because he contains all of this in his work.

In the 20th century, I do think as an American poet, he stands head and shoulders above everybody else in representing the American voice in its granularity, its simpleness, its directness, and its modesty.

I think Frost is a uniquely American poet because he listened to the farmers in New Hampshire and Vermont. He listened to ordinary Americans, as he traveled around the country. He was interested in what he called, the sound of sense.

He was interested in taking the ordinary speaking voice, and finding the poetry in the syntax, in the way words are arranged, in using the language, the diction, the tones of ordinary speech and turning this common speech into language. He believed that poetry was the common language, ever so slightly broadened and heightened. His poems depend, rest on the foundation of ordinary human syntax and diction and expression. He understood American expression and he used a slight New England dialect in his writing, as well. That gives it a flavor of locality.

He comes out of Massachusetts, where he was raised, he comes out of Vermont, New Hampshire, the places he thought of as north of Boston. That local diction, that local expression, is what makes him such a distinctly American voice. More so than any other poet of the 20th century, as far as I can tell. Frost’s popularity lies on this bedrock of familiarity. When people hear Frost reciting a poem, or when they read a poem by Frost, they hear their own voice at some level echoed back to them. This is speech they can respond to as being something deep in themselves. Frost gives American’s back their own speech … it’s slightly amplified and turned into a beautiful piece of poetry. 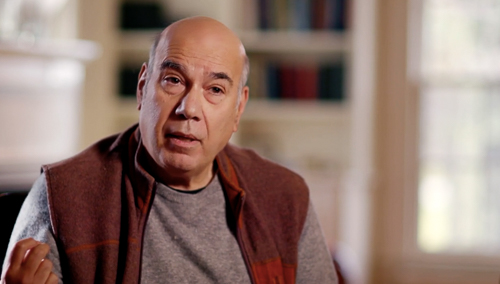 In our companion text, Professor Parini discusses Frost’s techniques and the depth of his knowledge of nature:

I think part of Frost’s achievement was to find the correspondences between the spiritual and physical world. His nature is spiritual in its depth, with its symbolic resonances. Whatever season he writes about, it seems like a season of the soul; there is a perfect Frost poem for almost anytime of year. …

[Q]uite early in his career, Frost came to regard synecdoche as essential to his craft. Synecdoche allows one part of something to stand in for a larger or more general concept, so that one natural image leads us toward the whole of nature. And it’s important to make the connection here between synecdoche and metaphor, as they remain so closely related. A metaphor is often a symbol, of course, and symbolic thought involves synecdoche: you allow the part to imply or gesture toward something beyond it, to lead us into a wider arena of thought and feeling.

Needless to say, poetic thought is metaphorical thinking. The poet names something, and it implies other things; comparisons are made, however explicit or inexplicit. In “Education by Poetry,” which I take to be Frost’s most complete essay on poetics, he writes: “Poetry begins in trivial metaphors, pretty metaphors, ‘grace’ metaphors, and goes on to the profoundest thinking that we have. Poetry provides the one permissible way of saying one thing and meaning another. People say, ‘Why don’t you say what you mean?’ We never do that, do we, being all of us too much poets? We like to talk in parables and in hints and in indirections —whether from diffidence or some other instinct.”

It is, I would suggest, these “hints and indirections” that lie at the heart of Frost’s poetry. He says one thing, meaning another. He leads us one way while asking us to understand that another way exists, that there is a tension, a troubling double-consciousness that will never let one thing rest alone, that is always leading us astray or, ideally, saving us.

Frost continues: “I have wanted in late years to go further and further into making metaphor the whole of thinking.“ He notes that scientific and mathematical thought all depend heavily on metaphors; in this, he bridges the gap—he always did—between poetry and science. He was, at heart, a naturalist, and his examination of the natural world as an early ecologist, was profound and particular.

When I came to Middlebury, in the early eighties, I got to know Reginald Cook, who had taught American Literature for decades and was a good friend of Frost. They often took long hikes together in the Green Mountains. Once they began a hike on the Long Trail, on Bread Loaf Mountain, and they had not managed to get very far when Frost yelled ahead: “Hey, stop. Come here!” He led Cook to a tree where he found a peculiar green mold growing at the base of the trunk. Frost studied it for a while, but was unable to Identify the mold. He cut off a slice, put the sample into his handkerchief, then insisted on heading straight to the college library, where he knew there was a good book about molds. The point is that he wanted this kind of particular knowledge.

In fact, Frost had a more detailed sense of the natural world than almost any other major poet, including Wordsworth. He named particular trees, plants, and shrubs. He understood the disposition of pastureland and town. In “Directive,” for example—one of his most ambitious and intellectually rich poems—he demonstrated a remarkable grasp of geological formations.

This knowledge came from reading as well as close observation. Frost always read deeply in science, with a particular interest in geology and botany. But he also discovered a good deal of what he knew about the natural world from his hikes, his habitual walking in the woods.

His poems, quite often, feature a man walking out in the woods by himself… Reading Frost, one discovers the pattern repeated again and again: the solitary walker who confronts the nature of nature in New England firsthand and comes to understand something about the world, of nature and of spirit, by firsthand observation.

Frost was, and remains, America’s great poet of nature, especially the nature of New England. He was one of our most singular and striking voices. The complexity of his thought, coupled with the granular weight of his language, draw us back to his poetry again and again. It’s easy to underestimate Frost, as the lines themselves are both fetching and, as poetic language, quite simple. His simplicity is deceptive, and as one follows this poet through the woods, looking and listening beside him, watching the many transformations he described so well, one is lifted by him into the realms of spirit. He was, I think, a spiritual master, and one of the most gifted teachers who ever lived and wrote. 3 “

“The land was ours before we were the land’s.”

From The Gift Outright, by Robert Frost, spoken at President Kennedy’s Inauguration.

One Acquainted With Science

Frost , the auto-didact, dropped out of Dartmouth and Harvard, then taught himself Latin and Greek, read the canon of English writers as well as modern writers, and explored the scientific and learning theories of James, Dewey, Bohr, Einstein, and Planck. This background explains the scientific bits in some of his poems. In ‘The Wood-Pile,’ near the end of the poem, the poet wonders about an old wood pile he encounters:

The wood was gray and the bark warping off it
And the pile somewhat sunken. Clematis
Had wound strings round and round it like a bundle.
What held it though on one side was a tree
Still growing, and on one a stake and prop,
These latter about to fall. I thought that only
Someone who lived in turning to fresh tasks
Could so forget his handiwork on which
He spent himself, the labor of his ax,
And leave it there far from a useful fireplace
To warm the frozen swamp as best it could
With the slow smokeless burning of decay.

Not too many poets would know that the metabolism of decay organisms is chemically equivalent to a wood fire, just slower, and does release heat.  Again, hear the scientific reference when President Kennedy used a line from Frost’s “Our Hold on the Planet” at the very end of his last speech:

Take nature altogether since time began,
Including human nature, in peace and war,
And it must be a little more in favor of man,
Say a fraction of one per cent at the very least,
Or our number living wouldn’t be steadily more,
Our hold on the planet wouldn’t have so increased.

A fraction of one per cent or even less, in terms of differential survival, is all it takes to capitalize on differences among individuals and to drive evolution. – Rip Sparks